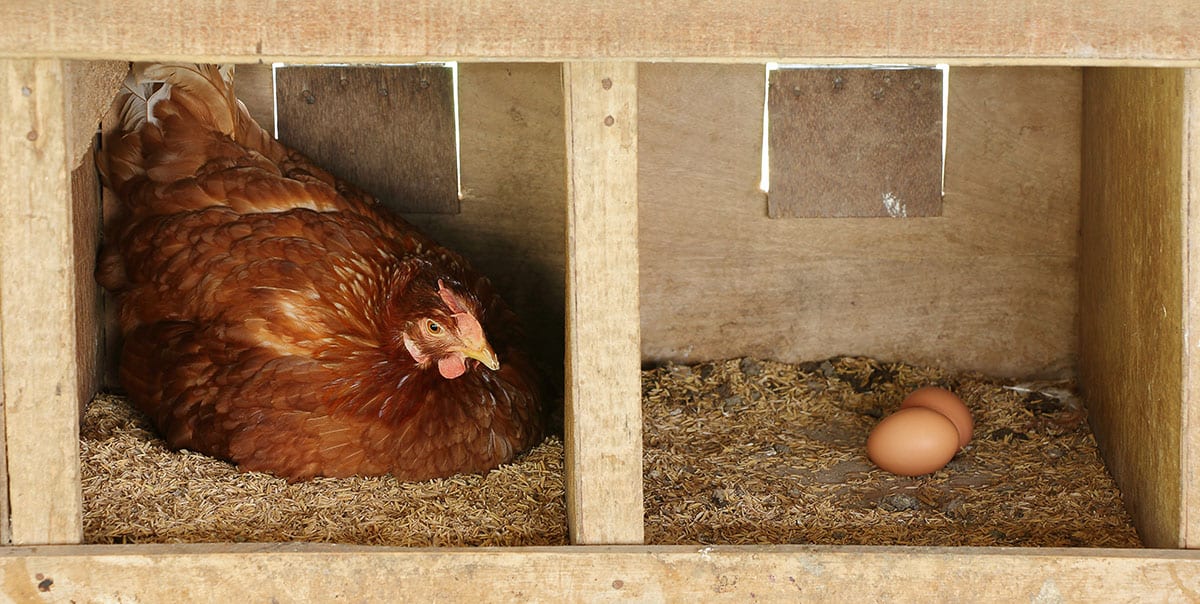 Most chicken keepers love animals, and they don’t want them to suffer. That’s probably why so many animal lovers and chicken farmers alike wonder if it’s painful for chickens to lay eggs.

After all, many hens lay almost daily. If they do suffer during egg-laying, it would certainly make even a free-ranging hen’s life a lot harder than it looks. Luckily, this does not seem to be the case.

Egg-laying is unlikely to be nearly as painful to a healthy chicken as giving birth is to many women. The chicken anatomy is very different from humans’, and they are well built for laying eggs. Most chickens also don’t show signs of pain after having laid eggs.

Not convinced or want to learn more? Let’s dive a little deeper.

Chickens Are Build for Egg-Laying

In fact, most animals have evolved birth-giving to be as quick and painless as possible. But because a woman’s pelvis is relatively narrow and we have evolved to grow very large heads, we also have babies with larger heads than what the pelvis is adapted to accommodate. Therefore giving birth takes longer and is more painful.

On the other hand, a hen’s bones are very flexible, and her pelvis is wider and flexible as well. Chickens also use their cloaca for pooping, peeing, and egg-laying, indicating that the feeling is more akin to a large bowel movement than giving birth.

Also, eggs are shaped in a way that makes them well-suited for being pressured out, unlike human babies and most baby mammals, which (obviously) have much more irregular shapes.

Few Signs of Pain or Trauma

Moreover, one can usually see when a chicken is in pain or traumatized. A chicken in pain will usually not eat very much, and they will avoid activities that increase their pain – such as physical activity. A traumatized chicken will also show indications of shock, such as avoiding other chickens, moving less than usual, etc.

Neither of these indicators of pain or shock is noticeable when you observe a hen that has just laid a regular egg. She will just go on about her day as if nothing unusual has happened.

Of course, we don’t know for sure, and we can’t ask the chickens. We can only judge based on indicators. Unless a researcher one day will do a brain scan to check if the pain centers light up, we can’t be sure one way or the other. That would be an interesting experiment, but not one that I believe anyone has carried out yet.

We also don’t know if laying an egg does cause some pain or discomfort without it being sufficient to cause any significant signs of pain. In which case, we should appreciate that egg-laying only takes a few minutes.

A hen’s first eggs are significantly smaller than ordinary eggs from the same breed. That could indicate that chickens have developed to slowly adapt the young body to the egg-laying process. Laying full-sized eggs from the start would cause significant damage to the vent, increase the risk of infections, perhaps and be an evolutionary disadvantage.

Young hens also often squawk very loudly the first few times, indicating pain or perhaps just surprise of an unknown situation. In addition, the eggs can be bloody, which is most likely related to a broken blood vessel in the vent.

While young egg-layers don’t show sign of lasting pain or trauma, I think we can safely assume that laying the first eggs are at the least an uncomfortable experience.

When Egg-Laying Does Cause Pain

While normal, healthy egg-laying does not generally seem to be painful for chickens, there are situations when egg-laying will undoubtedly cause noticeable or even excruciating pain. The examples below are not daily occurrences but still a risk factor.

Occasionally a chicken will lay an unusually large egg. Some large eggs can be twice the size of a normal egg from the same breed, and sometimes even bigger than that.

Usually, these gigantic eggs are smeared in blood, which would indicate a damaged vent. This would at least be somewhat painful. While I have never observed a chicken’s behavior after she has laid a larger-than-usual egg, I would imagine that she would look somewhat uncomfortable for a while.

Occasionally an egg will break inside then hen, and the sharp pieces of the shell might cut her, leading to anything from a small scratch to serious infections.

Normal eggs usually go through the reproductive system without issues, but thin shells are much more fragile and more at risk of breaking. Therefore it’s important to provide sufficient calcium (such as oyster shells) to your chickens.

One Situation that we know for sure is painful is when a hen gets egg-bound. This is when an egg is physically stuck inside the hen’s reproductive system.

When a hen is egg-bound, she shows clear signs of pain and discomfort. She will be weak, not eat, and have a hard time breathing. Without treatment, this can be fatal to the hen.

Egg-bound is not a common occurrence, and it is most prevalent in high-production hybrid breeds and young hens. Although bad health, in general, can lead to a hen becoming egg-bound. To a large degree, this can be prevented by feeding your chickens right and providing them with sufficient space for physical activity.

Based on visible indications, egg-laying is to most hens just another bodily function – nut much different from pushing a large bowel movement. Young chickens will likely feel some discomfort, but as their body adapts, it will not bother them much.

Occasionally problems will occur, causing discomfort or even pain. That is usually related to health issues or unusual situations. Such as a very large egg, broken eggs, or if an egg gets stuck within the reproductive system.

While the occasional larges egg is hard to prevent, most health issues can be prevented by providing the chickens with sufficient space, the right food, and a stress-free environment.