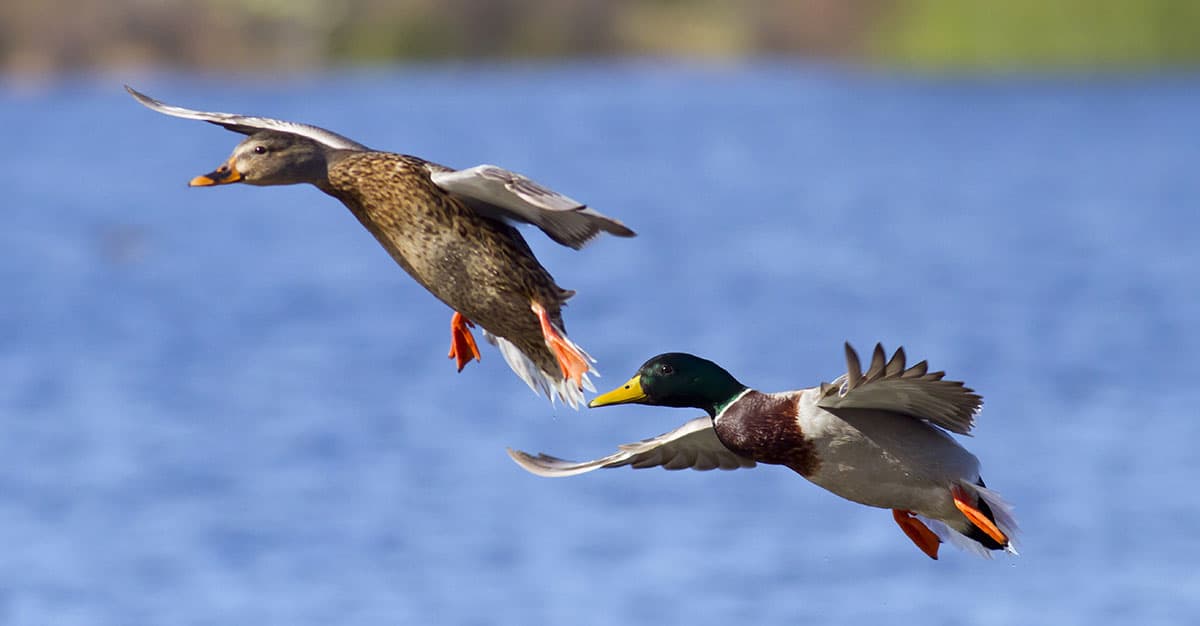 I own a very large and angry drake that will follow you around and try to bite you if you let him. He can be a little scary to visitors, but can he (or his fellow ducks) actually do any serious harm to a human?

A duck is not able to kill a human. Because of their small frame and limited fighting capabilities, even the largest duck breeds pose very little threat to humans. However, in very rare circumstances, a duck can unintentionally cause indirect damage that results in a person’s death. Many ducks also carry diseases that can potentially kill.

How much (or little) damage can a duck actually do to a human? And what are those rare circumstances? Let’s look into the ways that people have died from being in contact with ducks.

How Much of a Danger Can a Duck Pose to a Human?

Ducks are relatively small birds in terms of their potential strength against humans. The largest ducks weigh up to around 12lb (5.4 kg), which is not a tiny animal, but far from a swan size, which can weigh up to 26.5 lb (12kg).

Ducks are also much less aggressive than swans, as they will most likely try to escape when they feel threatened. Again, unlike the swan or even a goose, which are both much more likely to attack.

Drakes fight each other by grabbing the opponent’s neck and holding him down with a firm bite. Not a very efficient strategy against a human. Although a particularly aggressive drake may try to bite you, that bite is unlikely to hurt very much.

Ducks also don’t have much in terms of weapons. They do have sharp, quite claws, but they are not very useful in a fight. While a rooster can jump and hit you with his spurs, a duck is not nearly agile enough for that kind of acrobatics.

Then there are the wings. A swan can break a person’s arm if they get hit by the powerful swan wings. But duck wings don’t have nearly enough force to do any serious damage.

The Duck that Killed a Man

So, we can safely say that ducks don’t pose any serious direct threat to people. But they can, on rare occasions, still cause damage and even death. Such as the case of the man who was killed when he was hit by a duck while jet skiing.

In 2001 Leon Resnick was testing a jet ski on a lake near Deerfield Beach, Florida. He was going around 55 mph when he collided with a flying duck, which knocked him unconscious and threw him into the water.

A co-worker didn’t see the accident but saw that Resnick had disappeared and contacted authorities. Later, they found the dead duck nearby as well as feathers in the jet-ski’s handlebars.

Technically, the duck did not kill Resnick, as he likely suffered a head injury and drowned. But that collision did indirectly cause his death.

In theory, a flying duck, or a flock of them, could down a jet plane if they enter the jet engine. This event, known as a Bird strike, is a not entirely uncommon occurrence, which, according to The Federal Aviation Administration (FAA), cost US aviation 400 million dollars annually and has resulted in over 200 worldwide fatalities since 1988.

Bird strikes often happen when a bird (or a flock of birds) are pulled into a jet engine, causing it to stall. But occasionally the birds also hit cockpit windshields, potentially breaking the glass and cause all sorts of havoc.

Technically, it is probably more likely that it’s the airplanes that his the birds, and not the other way around. But I guess that’s another subject.

To the best of my knowledge, there are no statistics on the number of bird strikes involving ducks, but even if (and that’s a big if) they made up the majority of worldwide fatalities, this would at most amount to a handful of deaths annually. Much less than the number of people who die from vending machine accidents.

While most duck owners make sure to keep their ducks healthy and under good sanitary conditions, this does not entirely keep potentially lethal diseases out of the run, much less the wild birds. The droppings from wild ducks, in particular, can carry dangerous, and potentially fatal diseases, such as E. coli and Salmonella.

A relatively common illness from domesticated birds is Salmonella, which, according to the CDC, annually kills 420 people in the US alone. Although this is a tiny fraction of the 1.35 million annual infections, salmonella can be fatal.

Salmonella infections are caused by consuming contaminated food or water; or touching infected animals, their feces, or their environment. All poultry can carry salmonella, and while we don’t know the exact numbers, it is reasonable to believe that ducks do make up some portion of these cases.

You can get E. coli from ducks through their meat, poop, or intestines. But the bacteria can also survive in the soil and even be transferred to humans through contaminated tools or soil.

E. coli is a bacteria that can be found in duck poop and intestines and in humans. Most types of E.coli are harmless and even beneficial to your health.

But some strains can cause diarrhea, pneumonia, and urinary tract infections. And one particularly bad strain can cause serious illness and potentially death.

Histoplasmosis is a lung disease caused by inhaling spores from the Histoplasma capsulatum fungus. The illness is not typically dangerous or even noticeable, but it can be fatal to people with weaker immune systems or in case of prolonged exposure to the spores.

The Histoplasmosis fungus grows over the dried bat and bird droppings, including from ducks. People can get infected by inhaling the spores when they are removing droppings or cleaning contaminated soil.

While most of these diseases are not usually lethal, they do pose a health risk, especially to immunocompromised people.

Ducks have caused human deaths in rare and unusual cases. Either due to collisions with motorized vehicles or (more commonly) as carriers of diseases. But it would be safe to say that ducks are not able to kill a human directly.

Some drakes can behave aggressively, and they may even try to bite you. But they are unable to cause any serious damage, let alone kill you.