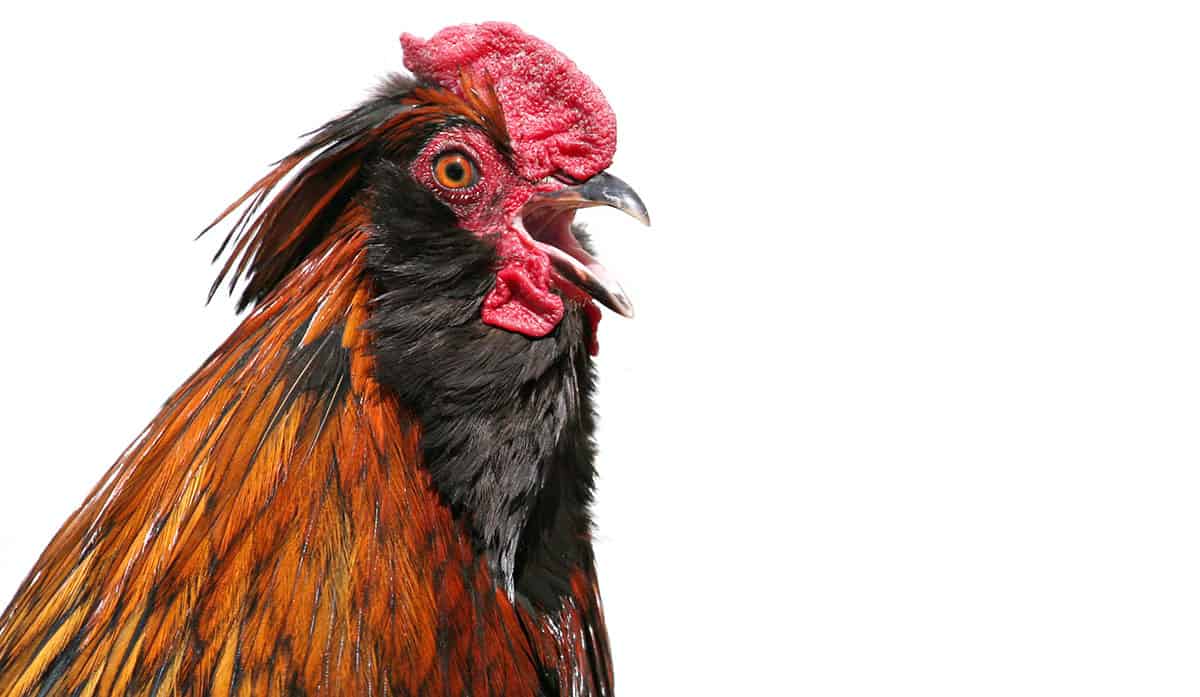 Many backyard farmers live in small to mid-sized lots in an urban or suburban setting surrounded by neighbors. Which is probably why I am so often asked if chickens are noisy. We all know that roosters are crowing, but how much noise do hens make?

A very sensible consideration if you wish to remain on good terms with the neighbors, by the way.

Chickens do make noise. Roosters are the loudest, but also also make noises during the day, although the hen’s noises are less penetrating and less likely to bother others. There are things you can do to limit the noise, but it is not possible to eliminate it entirely.

Typically, a flock consisting of only hens will not bother you or your neighbors too much. But they will be noticed, which could be a problem you are living very close together or if you are hoping to keep your chicken conspiracies a secret from the HOA.

In this post, we will go through when chickens make noises and how to keep it at an acceptable level. If you decide that they will annoy your neighbors (or your spouse) too much, there are other options. Perhaps consider if quail will suit your requirements better. Quail are considerably quieter than chickens.

When do chickens make noise?

Most chickens are quiet most of the time. You will hear a quiet clucking sound from time to time, but they do not make much noise unless they have a reason to do so. Which is quite often but not constantly.

As you probably already know, roosters will crow. They do it often and they usually do it quite loud as well.

How much and how loud depends on the breed and as well as the individual rooster. Some are less noisy while others will keep crowing all day. The pitch of the crow also makes a difference, as a deeper sound is more bearable than a very high tone.

I have been told that some breeds do not crow. That is a myth. While some are less noisy than others due to their build and/or composure, all healthy roosters crow.

Another factor that will increase crowing if is one of your neighbors keeps a rooster as well. That will often entice them to communicate by crowing back and forward for hours on end.

If crowing noises would be an issue in your neighborhood, you are better off without a rooster.

However, some chicken keepers do use a rooster collar that prevents them from crowing. While I wouldn’t consider it animal cruelty, I’m not sure I like this practice, but searching for the term will provide you with more information.

When They are Warning Each Other

Chickens warn each other by squawking and cackling very loudly and repeatedly. Usually, this is the rooster’s job, but hens do it as well. Especially if there is no rooster around.

Chickens seem to have a policy of erring on the side of caution. Better one warning too many than getting hit by an unexpected predator. That means you often will hear this sound even when there is no obvious cause for alarm.

When They are Laying Eggs

Some hens also call out quite loudly when she’s laying eggs. Not all chickens do this, and it seems some breeds do this more often than others, but I have yet to find out a consistent explanation of what causes this.

This so-called egg song is not much different from the warning sound referenced above. My mom used to say that the hen was calling out “Cluck, cluck, cluck EGG!”

When They are Being Attacked

Chickens make a lot of noise when attacked. And for good reasons. While the warning sound often is not an indication of danger, this certainly is.

If you hear this loud squeaking noise something is up, and you should check it out immediately. Chickens only flare up like that if they fear for their life.

When They Have Baby Chicks

Mother hens will make a clucking sound to call on her chicks, especially when she finds food.

Her call is not very loud and quite a pleasant sound. It shouldn’t bother anyone but the very most sound sensitive.

When they are Baby Chicks

Young chicks also talk and do it quite a lot. It’s a very cute sound at a low decibel, which shouldn’t bother anyone either.

A lost (happens easily) or lonely chick will make a somewhat louder sound to attract the attention of his or her mother. The sound is of a drawn-out chirp which can be bothersome to some neighbors if they live nearby your chicken run and it happens often.

Generally, baby chicks will not attract much attention, though. While they “talk” at lot more than adult chickens, they don’t have the equipment to be loud.

Are Chickens Noisy at Night

Chickens are very quiet during the dark hours when they sleep. This makes sense from a survival standpoint, as they would not want to bring attention to themselves while most predators are out hunting.

Chickens are very drowsy during the night. Even the more fearful chickens will remain seated if you enter the coop while they are half asleep.

However, they will make noises if they are attacked. Which is one reason why you want to make sure the run is predator-proof and perhaps lock them up in the coop every night.

Being disturbed by chicken noises in the middle of the night is not an issue, but rather that chickens wake up as soon as the sun comes up. Which may be a lot earlier than what you (or your neighbors) prefer.

How to Minimize Chicken Noises

Although chickens will make their sounds, there are ways to keep the noise level down, or at least keep it from bothering others.

One obvious option is to not have a rooster, since roosters are by far the loudest member of the flock. That will help significantly help against complaints from your neighbors and perhaps your spouse.

But, as mentioned, hens also make noise. Not as loud or consistently as rooster cowing, but trust me when I say that a particularly noisy hen can be a nuisance to you and to other people.

If noise is mainly an issue during the early mornings, you can add shutters to the coop. If they don’t see the daylight they will sleep longer and remain silent until you let them out.

If you have more space, I recommend you keep the run in the furthest corner of the property, away from neighbors. While a rooster’s crow can be heard far and wide, most hen noises will be a lot less noticeable if you make some distance between them and your neighbors.

Providing a safe environment will also keep the noise level down. If they feel safe again predators from above and from behind, they will be less tense and offer fewer false alarm warning calls.

A safe environment includes partially covering the run as protection from hawks, as well as providing hiding places within the run. If they are in an exposed run with nowhere to hide, they will react stronger to the slightest signs of danger.

In the end, it really is a matter of how easily bothered your HOA, your neighbors, and your spouse is. While chickens do make noises, they typically are no noisier than children or dogs. The difference is that people are more accepting of children and dogs since they are a common part of most people’s lives.

Besides the aforementioned suggestions, choosing the right breed will also help to keep the noise level down.

Some breeds are notoriously loud while others are a lot calmer. While their individual personalities are an important factor, choosing a quiet breed will most likely ensure less overall noise.

According to omlet.co.uk these breeds are known to be the quietest:

In my own experience, the quietest breed we have had is the Australorp, which happens to be my favorite breed as well.

I've always been fond of chickens, but my father stuck to the most popular breeds, and I didn't know that eggs come in so many lovely hues until I started breeding my own. Among these amazing birds,...

Continue Reading
link to Do Chickens Remember You? | The Amazing Memory of Chickens

Chickens are surprisingly more intelligent than one might think. They can recognize people and other chickens, understand cause and effect, live in complex social structures with strong hierarchies,...