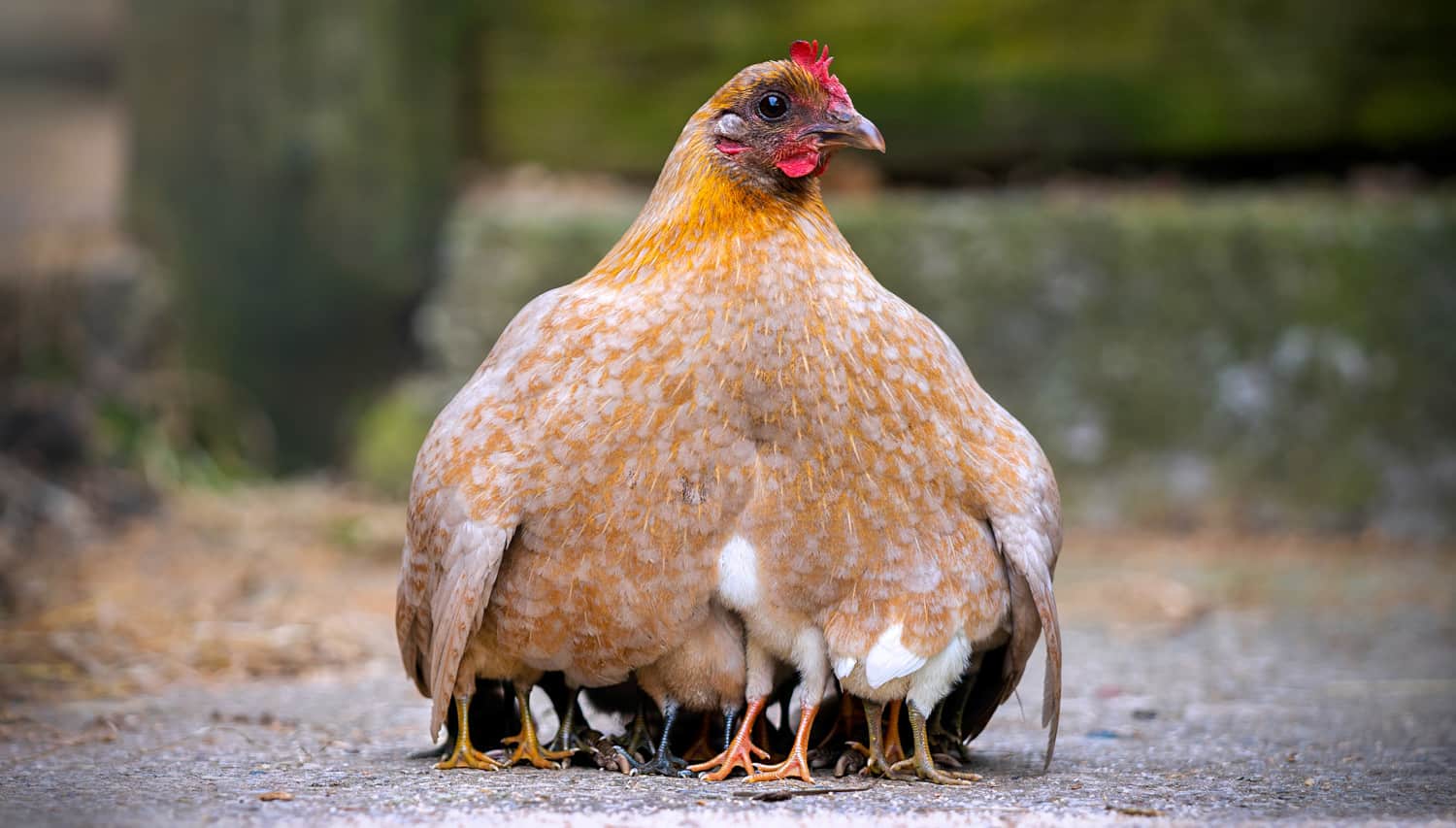 I’ve loved chickens for as long as I can remember. While other kids were playing with their dogs or cats, I was feeding the hens in our backyard and collecting eggs from the coop. It’s an experience that has shaped who I am today. And why chickens? They’re such interesting animals: curious and independent, yet loyal and loving mothers to their baby chicks – caring for them until they are of age to take care of themselves.

In this post, we’re going to explore the relationship between broody hens and their offspring. We will be looking at why they take such good care of them, how they leave them when they are old enough to survive on their own, and what you should consider if you need to separate a broody hen from her chicks.

Do Chickens Leave Their Chicks?

A mother hen will care for her baby chicks for typically 6 – 8 weeks after they have hatched – sometimes a little earlier or slightly later. She will then gradually leave her babies. At this point, the chicks will be fully feathered. They will not be fully grown, but they will be old enough to take care of themselves.

During those six to eight weeks, the broody hen is almost entirely occupied by providing her chicks with three things: food and water, security, and warmth.

The broody hen will help her chicks by finding food for them. As chickens are not mammals and thus do not provide milk, the chicks will need a food source that is suitable for them. When she finds it, she will cluck loudly to let her baby chicks know where it is.

One proof of a chicken’s determination to her little chicks is how she forgoes her own needs. While most hens will consume any food they find as fast as possible, a mother hen will resist that natural urge as she needs to make sure her chicks are always fed first.

Day-old chicks are very vulnerable and will remain so for some time. Rats and other predators pose a very real danger for the chicks, so the broody hen will protect them by any means necessary – even laying her body in front of a predator to save her offspring.

She also provides security by protecting them against members of her own flock. Chickens have a very strict social hierarchy, with the strongest being dominant over the others. The tiny chicks would be at the very bottom of that hierarchy if not for the protection of their mother. They would be pecked at and possibly killed.

In the run, the hen will stand up to any chicken (including roosters) if they try to harm her chicks, no matter their size or her previous position in the pecking order. Good mother hens are fireless dragons and will stand their ground until their baby chicks are safe. Typically, even the alphas will leave a broody hen alone.

Young chicks are highly susceptible to hyperthermia. They need the brooding hen to provide them with warmth to survive. They can move around outside for a while, but they will return to the brooding hen once they are cold, and they will sleep under her wings to keep themselves warm.

As they grow bigger, they will need less and less warmth from their mother, but a mother hen will not stop brooding them until they physically can’t fit under her wings – at which point they will have a stronger immune system and better ability to protect themselves from the elements.

Do Hens Abandon Their Chicks?

A broody hen will keep her chicks close until they are able to care for themselves, with the exception of a few cases. Once this period is over, her hormones change. She will gradually lose the instinct of protecting and providing and starts to show signs of being ready to return to the other hens.

If she’s physically separated from the flock, she might pace the fence, and she will start laying eggs again. The hen can now be allowed to rejoin the flock (in this case, the pecking order was probably changing in her absence, so be prepared for a few squabbles). The chicks should continue to live in the brooder coop until they have reached their full size.

Should You Use a Brooder Coop?

If there is limited space in the chicken run, a mother hen should have a brooder coop and a small attached run. Here, she can stay with her chicks during the first weeks in a calm environment, protected from the other birds.

Just like an ordinary hen house, the structure should be strong enough to avoid large predators while having no gaps to let in smaller ones. The second part is even more important for a brooder coop as chicks are very vulnerable. Use hardware cloth and cover up any gaps or holes to keep rats at the door.

In my experience, it’s important to allow some interaction between the flock and the hen with her chicks. This way, it will be easier to introduce your chicks to the flock later on. If the run is secure and large enough, a brooder coop is not really necessary as the hen can stay with her chicks in the run. She will defend them while they gradually become a natural part of the group.

Do Adult Chickens Remember Their Mothers?

In my experience, chickens do remember their mothers and vice versa. Chickens do not show much affection after the brooding period, but they do seem to treat their adult chicks differently.

Smaller or weaker birds will generally be pushed around a bit by the stronger flock members, but I have noticed that dominant mothers often behave very amicably towards their chicks years after they have grown up. Even weak or small hens at the bottom of the hierarchy are often treated better by their mothers than by the other chickens.

Are they aware of their mother-child relationship? Probably not, but they still seem to develop some sort of special relationship. Of course, this is not always the case, but in my experience, this happens more often than not.

Can Baby Chickens Survive Without Their Mother?

A baby chick left to its own devices will have a very hard time surviving. Chicks require heat, food, and protection from predators to grow up healthy and strong. Without these, they will soon perish – especially if we’re talking about the first few weeks of life.

Chicks that are well cared for by people can thrive without the presence of a mother. In fact, they may have a somewhat better chance of surviving their first few weeks than a natural chick. Chickens raised under a heat lamp or (even better) a heating plate in a brooder box are easier for their owners to monitor and can be cared for in an environment that is more controlled.

When Can You Take a Baby Chick Away from Its Mother?

If you want to remove a chick from its mother, you should either do it as soon as the chick has hatched or wait until it is around eight weeks old.

If you only want to remove a few and leave the rest with their mother, doing it immediately is ideal. If you remove all the chicks when they’re still young and haven’t had the opportunity to imprint on the mother hen, they’ll be less inclined to call out for her. They will also be more comfortable with humans and easier to tame.

If you wait until the chicks are older, they will no longer need their mother. However, they will usually be more afraid of people, and if you remove only one or two chicks from a larger brood, they might get distressed and call out for the others.

Do Mother Hens Miss Their Chicks?

If you remove only a few of the chicks in a flock, their mother will fight you when you take them away, but she will forget almost immediately. As long as she can’t hear their calls, she won’t be distressed. Hens are not bonded with each chick as much as with the entire brood, so they don’t mourn for each one that leaves or dies. They can recognize their own, but losing a few does not seem to affect them very much.

However, she will be visibly distressed if you take away all of the chicks. She will look for their chicks and call out for them while pacing aimlessly around the run, and she may even refuse food.

This can go on for up to a week, but usually, she will eventually go back to her life. However, I have heard of hens becoming very depressed after losing all their chicks. They will hide in the coop and stay away from the flock. However, this seems to be uncommon, and ultimately, they will also return to their routine. However, a depressed chicken is an easy victim of bullying.

Unless you have reasons to separate chicks from their mother, it’s often best to let the chicks stay with their mother for as long as possible. They’ll part on their own when they are ready.

When Do Chickens Leave the Nest?

Newly hatched chicks will mostly remain under their mother for the first day while they dry and warm up. They will then start venturing out but stay within the nest. The bravest and most curious ones may leave the nest but remain very close by.

Just before they hatch, a chick absorbs the egg yolk. These nutrients provide plenty for their first 72 hours of life. Therefore, they do not need to eat during the first few days, which allows some time for the late hatchings to arrive.

On the second day, the broody hen will take her chicks out exploring and looking for food and leave any unhatched eggs behind. At first, the chicks will all follow the hen closely. She will show them where to eat and drink, and they will start following her around the run.

After a few days, some of the chicks have already started exploring on their own, but it will take several weeks before they will explore the wider world on their own. At around three weeks of age, they may start to roost by themselves but remain with their mother during the night.

When the chicks are six to eight weeks old, they’ll no longer be following their mother around as she has stopped calling them. At this point, they are fully independent and will mostly have to care for themselves. The hen may still step up if her babies are calling out or being attacked, but they will mostly have to take care of themselves from here on out.

I've always been fond of chickens, but my father stuck to the most popular breeds, and I didn't know that eggs come in so many lovely hues until I started breeding my own. Among these amazing birds,...

Continue Reading
link to Do Chickens Remember You? | The Amazing Memory of Chickens

Chickens are surprisingly more intelligent than one might think. They can recognize people and other chickens, understand cause and effect, live in complex social structures with strong hierarchies,...