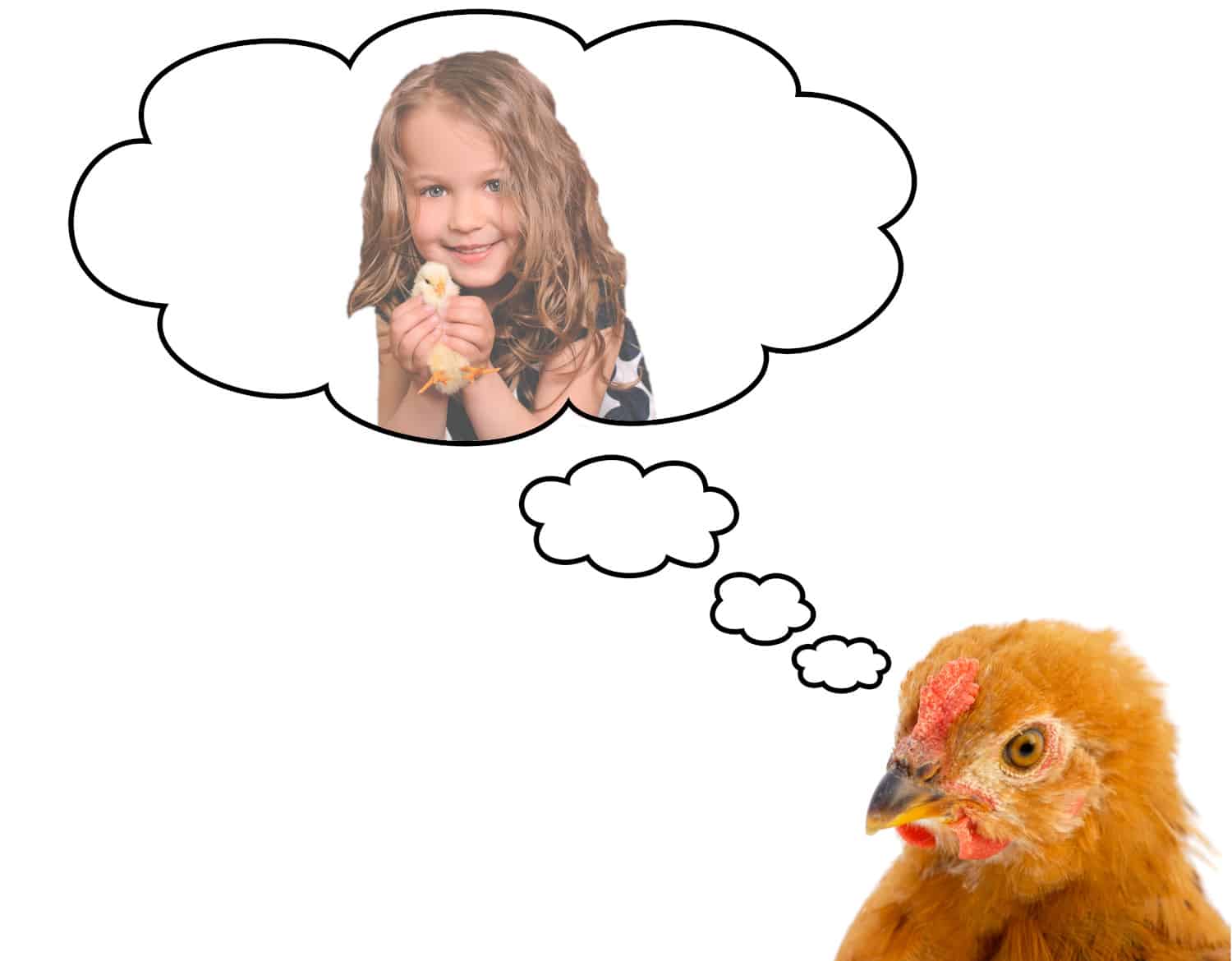 Chickens are surprisingly more intelligent than one might think. They can recognize people and other chickens, understand cause and effect, live in complex social structures with strong hierarchies, and respond to their environment in creative ways. But do they know who you are, or do they only experience rote memorization?

Chickens remember and recognize their caretakers and other people who regularly interact with them. While researchers are still exploring how long their memories last, chickens have been shown in studies to remember past experiences and distinguish between both human individuals and other chickens.

When I say that chickens are intelligent, I don’t mean relative to humans. Humans, as a species, have a unique capacity to be self-aware and mindful of the world. Chickens’ intelligence is more comparable to other birds, but they are more intelligent than many people give them credit for. They are curious animals that are able to do even simple arithmetic and can experience a range of complex emotions.

In this article, we explore the surprising complexity of the memory and inner life of these fascinating creatures. We will be drawing on our own experiences and research conducted by the scientific community.

How Well Do Chickens Remember You?

Research has found that chickens can distinguish between human faces. The researchers taught chickens that when they pecked on selected pictures of human faces, they would be rewarded with food. The chickens soon learned to pick the right people, and not only based on very apparent physical differences – they were also able to distinguish between male and female faces.

Training the chickens took on average 11.5 sessions of up to 40 minutes a session. Indicating that if you spend enough time with your chickens, they will eventually learn that you are different from other people.

Interestingly, the same test also revealed that the chickens showed preferences for attractive faces (as rated by fourteen undergraduates) over less attractive faces. Indicating that chickens have some facility for recognizing you as an individual and not just memorizing the pattern of your face in order to determine who provides them food.

These findings may not surprise you, as they only confirm what most chicken owners would have already observed. Any person who regularly feeds scratch and food scraps to their backyard chickens would tell you that their birds almost certainly form some kind of memory of you. They will come running when you approach the run, while visitors or other family members will not be acknowledged.

Note: If you search the web you will find several claims that chickens can recognize up to 100 faces. I have not found any research to support that, Not even anecdotal evidence.

It makes logical sense that the original chicken would have developed some form of memory. After all, if they didn’t recognize certain predators or where they have previously found food, they would have been eliminated from the gene pool long ago.

Domesticated chickens also seem to hold memories and remember people, or at least individuals they interact regularly with. Does that mean chickens retain memories of past experiences and can they recognize other chickens as well as humans?

Multiple studies on chicken memory have been conducted, including a very interesting study by the Roslin Institute. They found evidence that chickens have declarative representations, meaning they can use previous memories to guide their present behavior in new situations. This test revealed that chickens were able to not only return to places where they have previously found food, they also knew what kind of food it was.

Another study showed that chickens are able to remember objects that have seemingly disappeared behind a screen and that they are able to include cues such as the object’s direction to locate it again.

To my knowledge, no research has tested the maximum time a chicken can remember an object, human, or another chicken. Most tests have either been performed right after the initial training or after a few days. We may (for now) have to rely on our own experiences as chicken keepers to estimate this limit.

Communication and Recognition of Others

Chickens not only recognize who is and isn’t a member of their own flock, but they can also tell one individual bird from another. Richard H. Bradshaw had done extensive research on chickens and found that they are able to visually distinguish and recognize a large number of other chickens.

But their abilities to distinguish goes even further than just recognition. In one research, when computer-generated animations of common predators were shown to chickens, they gave varying alarm calls to indicate whether the predators were in the air or on the ground. This is a strong indication that chickens can memorize various calls and understand their meaning.

This relatively complex system of communication also explains why my chickens come running when I do my “feeding whistle” but not when my son tries to imitate it – they have learned to associate my specific whistling with food being delivered. In my experience, chickens are also pretty good at understanding visual cues. If I mimic the motion of throwing feed on the ground, they come running even if they didn’t hear my voice – it seems that they can use my motions as a cue to indicate that feed is being thrown.

Every chicken has a distinct personality, as indicated by its capacity to distinguish different flock members from one another. Some show better self-control than others, some are better mothers, some more flighty, and so on. And we all know that some roosters are more aggressive than others. According to one study, individual personalities even affect the selection of mating partners.

Research also indicates that (like humans) variations in personality are partly genetic and partly environmental. This implies that how you raise your chickens, whether from hatcheries or otherwise, can have a significant impact on how they develop.

Mother hens show strong signs of empathizing with their chicks in a way they don’t do with other chickens. Any chicken breeder will agree to that based on their own experiences, but research also backs that up.

In one study, researchers tested how mother hens would react to situations where either their chicks or themselves were exposed to a mildly unpleasant air puff. The hens showed much stronger visible and physiological signs of distress when their chicks experienced the puff of air than when the puff was directed at themselves. Indicating that they empathized with their chicks over themselves.

We don’t know exactly what chickens are thinking or how much they understand. We also don’t know to what degree they are aware of their own existence or if they interpret the world around up in the same way as we do. But there is solid good evidence that they do recognize our faces if they get a chance to be exposed to it long enough, or if it makes a strong enough impression.

Not only do they recognize us, but they also have some sense that humans have different personalities – just like they can differentiate fellow chickens from one another. A person who treats a chicken badly will be considered a threat, while a caretaker will be considered the bringer of food and entertainment.