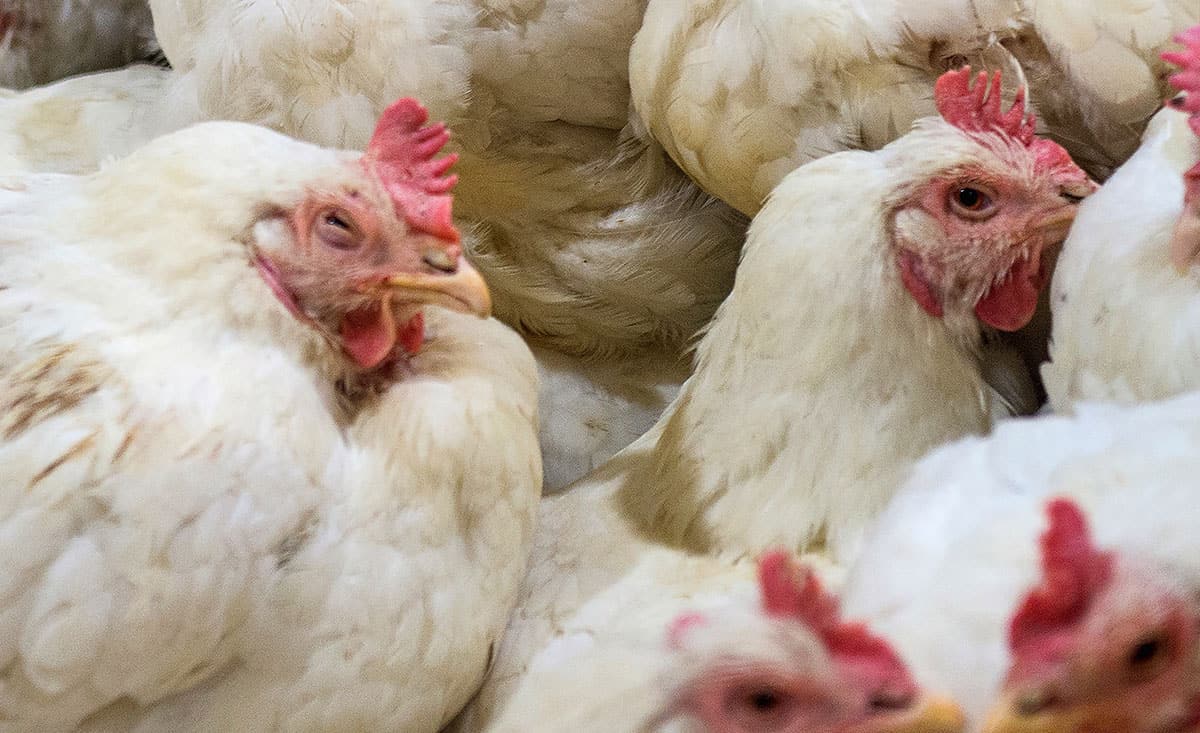 There can be many reasons why one or more of your chickens might have a swollen or puffy face. But swellings are almost always an indicator that something is not as it should be, and it very often requires intervention from the keeper.

These are the most common reasons why a chicken would have a swollen face:

Some of these (and many other) diseases are contagious. Therefore I recommend that you quarantine new chickens for a month before adding them to the flock. The same goes for any current chickens if they seem ill or injured. After you have moved a chicken to quarantine, do a good disinfecting in the coop, and watch your birds for more cases.

In this article, we will go through the five common causes for a swollen face or head and what you can do to alleviate the situation.

Injury to the face

As you probably know, chickens can be quite aggressive towards each other. It’s called a pecking order for a reason, and while a chicken’s pecking is mostly just a show of dominance, occasionally, a chicken will injure her victim’s face. Two roosters fighting over dominance will also occasionally cause a face injury.

Besides fighting, chickens can also get injured from accidents or predators.

Injuries can be harmless or deadly depending on their severity, and you should always treat an injury seriously as even a superficial scratch can turn into an infected wound.

Sometimes it can be difficult to distinguish between an injury and a disease. Bleeding sores usually (not always) indicate an injury, but if the sore is not fresh, the bleeding may have already stopped. The injury could also be below the skin and thus not cause bleeding.

If the chicken has no other symptoms than the swelling, you can usually rule most diseases and assume that your chicken is injured. But keep an eye out for symptoms of disease which may develop later.

An injured chicken should be removed from the flock. Otherwise, she will be subject to pecking from the other chickens that will take advantage of her weakened position to lift their place in the pecking order.

Keep the injured chicken in a safe place but preferably near the flock so she will remain a part of the flock as much as possible. That way it will be easier to reintroduce her when her wounds have healed.

Treat her injury by stopping any bleeding and cleaning the wound. Keep a high hygienic standard in her recovery space to minimize the risk of infections, and provide clean water and feed. Also, make sure she had completely recovered before you move her back to the flock.

If the chicken seems to be suffering a lot or is very weak and not improving within one or two days, consider calling a vet.

Mites live almost everywhere in nature, and they travel by attaching themselves to animals, including chickens and other poultry. Especially free-ranging chickens are at risk of unintentionally picking up mites, which they will bring home to their coop.

Knemidocoptes mutans, better known as ‘scaly mites,’ are tiny eight-legged mites that can’t be seen by the naked eye. They will attach themselves to a chicken’s legs or face to suck their blood, which causes a condition known as ‘scaly leg’ or ‘scaly face.’

Scaly face mites will cause the chicken’s face to swell and go flaky, which leads to tissue damage, lameness, and potentially death. The swelling can cover the eyes and make it hard for the chicken to see.

First, check each chicken for leg and face mites symptoms and quarantine all infected chickens. Then clean the coop throughout to prevent the mites from infecting the rest of your flock and spread a liberal amount of diatomaceous earth all over the coop.

Infected chickens can be treated by dusting them in diatomaceous earth. Then gently rub vaseline or vegetable oil to the head, including wattles and lobes, daily for at least a week.

Swollen Head Syndrome is a respiratory infection caused by an avian pneumovirus. This disease leads to a drop in egg production by infected birds and is highly contagious.

A chicken with the swollen head syndrome will be sneezing, coughing, and rale. Their eyes become red with a noticeable mucus secretion, and the face will be swollen around the eyes. Infected chickens will also be lethargic with a low appetite.

There is no known cure for Swollen head syndrome, but the disease can be prevented through vaccination. As it is very contagious, infected birds should be quarantined immediately, and the coop disinfected.

Mortality is often related to secondary infections and the death rate is low if the chicken is otherwise healthy and properly treated.

The best treatment is to support the chicken’s immune system by removing stressors, chlorinating the drinking water, and adding vitamins and natural immune boosters to their feed.

Infectious coryza is a respiratory disease. It is contagious by direct contact, airborne droplets, and drinking water. Seemingly healthy chickens can be carriers, which means that another symptom-free member of its flock may have infected your sick chicken.

Symptoms include discharge from the eyes and nostrils, sneezing, breathing difficulties, rales, and swelling of the face under the eyes. Infected chickens often have a pussy eye and a foul odor around the face.

Coryza can be prevented through vaccination. Infected chickens are treated with antibiotics such as Sulfadimethoxine, Erythromycin, and oxytetracycline. Ask your veterinarian about the recommended antibiotic and dosage.

The mortality rate is around 20% provided correct treatment is given.

Mycoplasma gallisepticum is a chronic respiratory infection with a highly negative impact on infected chickens’ health.

Antibiotics can reduce symptoms and transmission rate, but it will not cure an infected chicken, which will remain carriers for the rest of their life.

Mortality is, however, low, and vaccination can prevent Mycoplasma Gallisepticum from spreading throughout the flock.

Virulent Newcastle disease is a contagious viral infection that damages the chicken’s nervous, respiratory, and digestive systems. Symptoms include those of other respiratory infections such as swollen hard, sneezing, nasal discharge, and coughing but will also lead to muscular tremors, drooping wings, and complete paralysis.

Newcastle disease is fatal to chickens but can only (in rare cases) cause mild symptoms in humans. But as it is highly contagious and with up to 100% fatality, any chicken suspected of carrying the disease should be immediately quarantined and tested by a veterinarian.

Infectious bronchitis is another highly contagious viral with similar symptoms, such as nasal discharge, coughing, rales. Egg production can drop to 30%, and eggs will be misshapen and thin-shelled.

What to Do if my Chicken’s Face Is Swollen?

Regardless of symptoms, you should always separate the chicken from her flock. Injured or sick chickens are easy victims of bullying, and their diseases are very likely to spread throughout the flock and potentially to other poultry as well.

If you can identify the symptoms of scaly face mites or a simple injury, you should be able to treat the chicken as described above. But if there are any indications of respiratory infections, I highly suggest you contact a vet and ask for advice. Many of the diseases that cause a swollen face are very contagious; they have very similar symptoms, and they are all mid- to highly lethal to chickens.