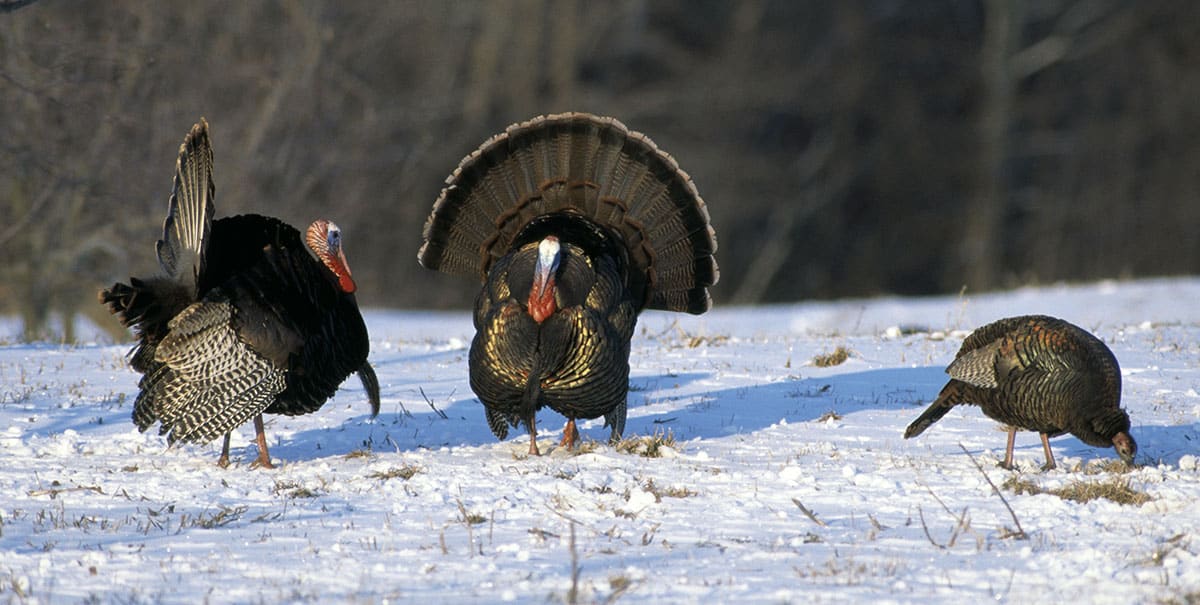 If you raise turkeys, you have without a doubt seen them fight. And it can be unpleasant to observe when they start pecking at each other, brutally tugging at the opponent’s neck skin, and chasing each other around.

But why do your turkeys fight and what (if anything) should you do about it?

Turkeys fight to exert dominance and establish a pecking order. This is normal turkey behavior, and while the fighting can be brutal to observe, it mostly results in superficial injuries. If you intervene you will often do more harm than good, but make sure they get sufficient space.

Continue reading for more information on why turkeys fight and what you can do to prevent serious injuries.

Why Your Turkeys are Fighting

Both males and female turkeys will fight each other. But toms (male turkeys) are particularly eager to fight over females. Especially during mating season. The fighting can continue for hours on end until one of them gives up and tries to escape the opponent.

As mentioned, turkey fighting is most often their way of establishing a pecking order. While older turkeys already have an established hierarchy, young ones don’t, and, as with most poultry, the fighting starts when they are reaching maturity.

Jakes (immature males) will attempt to establish themselves as high in the hierarchy as possible, as a strong male will have easier access to the hens. First-time turkey breeders will observe them go from cute baby poults to hormone-fueled jakes obsessed with fighting each other (and you, if you don’t establish your leadership).

Among much other poultry, the fight is often over as soon as the loser gives in. But turkeys will continue chasing the loser around for a while – sometimes for hours. This looks likes bullying, and maybe it is, but it’s also normal turkey behavior.

When You Should Intervene

So, since figting is to be expected when should you intervene?

Among turkeys, the fighting can last for days, and it can be quite brutal. The strongest will be chasing the weaker ones around or demonstrate dominance by grabbing them by the head and holding it down. However unpleasant it looks to us, that’s natural turkey behavior that you can’t do much about.

But if the fight never ends, or the fighting turns very violent, you should protect them from getting seriously injured.

A turkey that has already been badly injured will be an easy victim of further abuse and possibly get killed. A little blood from the neck is normal after a fight, but you should intervene if one looks to be in pain or ill. Separate the injured turkey and treat its injuries until it has regained its health. Consider calling a vet if the turkey is in very bad shape.

In case violent fighting between two or more turkeys continues for many days, and it seems like they are unable to establish a stable pecking order in the flock, then you should also consider taking preventative steps.

How To Prevent Turkey Fighting

If a natural pecking order is not established, it’s likely because they have too little space or a high male-to-female ratio.

Make Sure They Have Sufficient Space

Free-ranging is always the better option, and turkeys need a lot of space. At least 25 square feet of outdoor space per bird, which is significantly more than necessary for even the largest of chicken breeds.

Too little space will stress the turkeys out, cause social tensions, and make them more aggressive. Furthermore, with less than sufficient space, the loser cannot escape their tormentor, which will make serious injuries more likely to happen.

Minimize Sources of Stress and Boredom

Like most other animals, stress and boredom will make turkeys more irritable and aggressive.

Stress can be caused by several factors, such as extreme cold or heat or high humidity. Insufficient or wrong nutrients can also cause stress in turkeys. If your adult males or females recently started fighting more than usual, perhaps you just have had a heatwave, or they are exposed to very cold winter temperatures. Perhaps you changed their feed schedule or switched to a lower quality feed.

Boredom is also a common cause of fighting within turkeys as well as many other animals. Try making their lives more interesting by adding something interesting to their diet and make them work a bit for their treats. Keep their instincts for scratching and foraging active by spreading corn and other treats on the ground.

Here is a great list of things you can do to make your turkeys’ lives more exciting and interesting. They will fight much less when engaged in other activities.

Seperate Them Only If You Have To

Many turkey (and chicken) owners are quick to resort to separation at the least sign of conflict in the flock. But that’s rarely the right response.

As mentioned, fighting is their way of establishing a hierarchy, and if two fighting turkeys are separated, they will not be able to establish who the alpha is. So you should only separate a fighting pair if you intend to keep them apart. Otherwise, the fighting will only continue when you put them back together, and your interference will simply draw out the establishment of the pecking order.

That being said, since we manage our poultry and keep them contained behind fences, they are unable to establish a natural flock composition. That means it’s your responsibility to keep the right flock size and flock composition.

As mentioned, they need sufficient space, but should also keep the right ratio of males to females. Too many toms in the same space can cause trouble.

Ideally, you shouldn’t have more than two toms to every 5 hens – preferably only one. If you have hatched many male poults, make sure to provide a lot of outdoor space or separate them when they start fighting at around 3 months old.

Turkeys fight to establish a hierarchy. This is expected behavior and does not require intervention. However much you want to help, intervening will usually only cause more harm than good.

In certain circumstances, you should separate two fighting turkeys, but only if one is badly injured and requires treatment.

But it is also your responsibility to make sure they have enough space and that there are not too many males fighting over too few females. That will keep the fighting at an acceptable level. Keeping your turkeys engaged in other activities and minizing stress will help to prevent fighting as well.