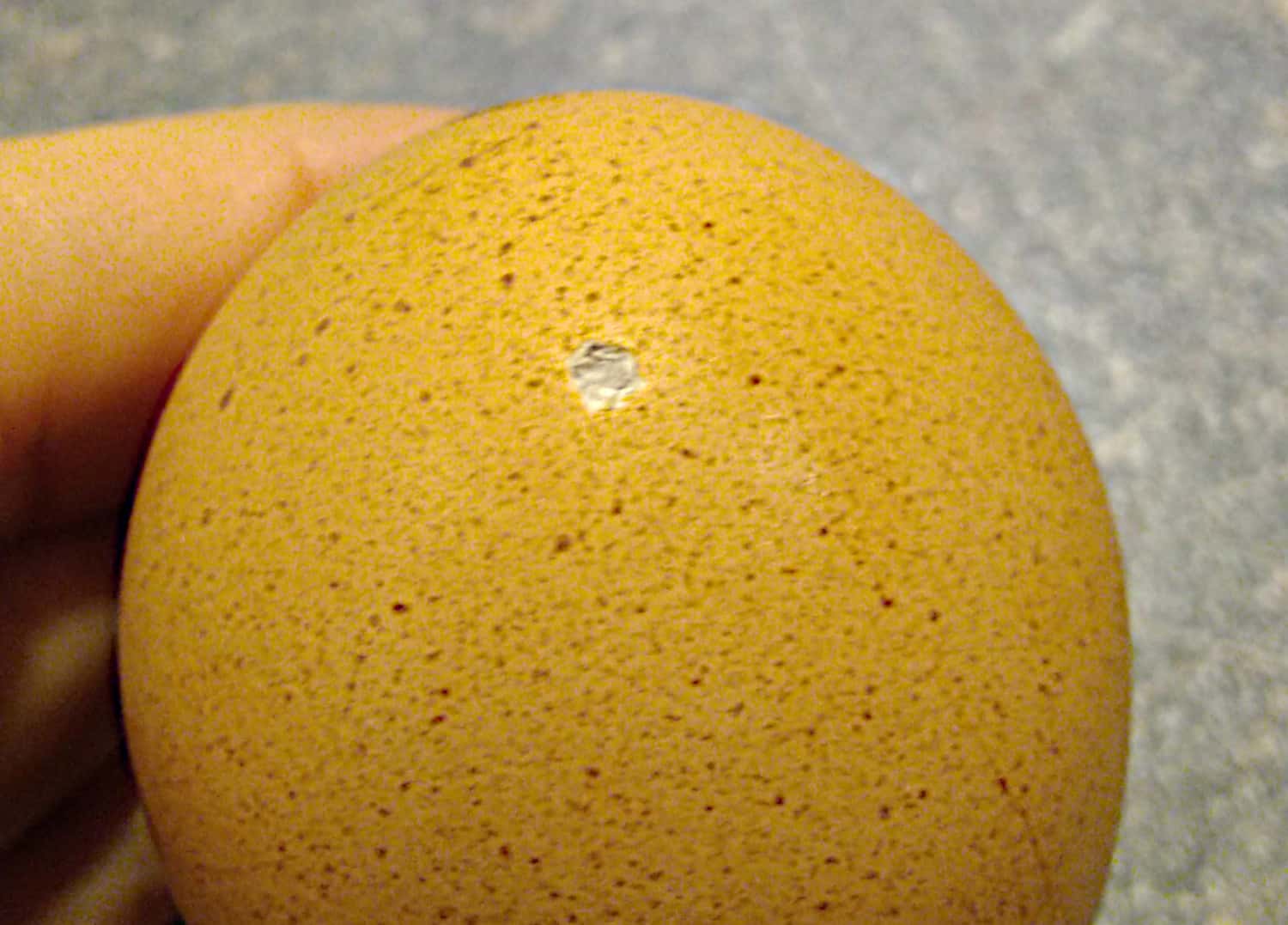 Eggs are a nutritious, healthy food source that many people love. But sometimes, they will have small holes in their shells. This can happen for several reasons – some are harmless, while others can be signs of a more serious problem. Therefore, it’s important to understand what causes it and make an educated decision on whether or not action should be taken.

Common reasons why small holes appear in eggs are:

In this article, we’ll discuss clues to what may have caused the hole, why chickens make small holes in their eggs, and what you need to know about eating an egg with a damaged eggshell.

Why Is There a Hole in My Chicken Egg?

There are several reasons why a small hole can form in an egg. It can be difficult to identify the exact cause, so it’s important to understand the most common reasons and consider the circumstances.

If the hole is small and round, it’s probably the result of early damage to the egg. These small holes in the eggshell are called pinholes and are moderately common. They are usually smooth or slightly cracked around the hole. The damage can be caused by the egg being dropped, but often it is caused by the hen accidentally damaging the fragile newly laid egg with her claw.

It is also possible that the egg hit something hard when it fell from the chicken, such as a small stone or another object that damaged the egg on impact. I recommend checking for anything hard in her nesting box to confirm or rule out that possibility.

If the small hole is larger than a pinhole and irregular-shaped, there’s a chance a beak caused it. Possibly a chicken pecking it out of curiosity. If the egg is intact except for the hole, the chicken didn’t get to enjoy the taste of eggs, which is a very good thing. Chickens eating eggs is a serious matter that should be stopped.

Many predators love eating chicken eggs. These little protein bombs are a perfect meal for pretty much any predator, from wild birds and snakes to rats. Some will steal the eggs while others will eat it right where they find it.

The predator may have been scared off (perhaps by the rooster) before it got to eat the egg. I recommend looking for additional signs of a predator in the area and if you find any, take measures to deter them. Larger predators may take your chickens next time, and smaller predators will not hesitate to eat a young chick.

Sometimes, the shell was not formed correctly in the chicken’s oviduct. If you find little bumps of thicker shell around the hole, it is a rather clear sign that the shell did not form properly.

This is more likely to happen to young egg-layers but can happen to hens of any age. It is usually not a recurring issue, but there could be a problem with the hen’s reproductive system, so keep an eye out for similar holes in future eggs. If this was a one-off, I would not worry, but you should have your hen checked by a vet if it happens often.

The Egg Is Rotten

As an egg gets older, outside bacteria start to seep through the shell and protective membrane. The bacteria will consume the egg white and yolk and produce gasses in the process. If the gas is produced faster than it can escape through the pores on the surface, it accumulates a pressure that can cause the egg to explode.

Other times the reaction is less violent, and instead, a small or large hole or crack is created in the eggshell through which the pressure can be relieved. If the egg smells foul, that may be what caused the hole.

A Baby Chick Made the Hole

Some chickens prefer to build a nest in a secret location where they can hatch their eggs in peace. If you have many chickens or they are free-ranging you may not have noticed a broody chicken missing for a while until you found her nest. At this point, the nest may have been abandoned, but not before a chick tried to get out and perished in the early stages of hatching.

If a chick has tried to get out, the hole will be opening outwards. The surest way to definitively confirm that a chick has formed inside the egg is to open it up and see. Prepare for an unpleasant experience, especially if the egg has been sitting there for a while.

Why Do Chickens Make Holes in Their Eggs?

Often, a hole is caused by an accident when a chicken steps on an egg. But sometimes, they peck a hole in the egg out of curiosity or boredom. This can lead to egg-eating.

Egg-pecking chickens can quickly become egg-eating chickens, and you may have a serious issue on your hands.

One way to stop chickens from pecking eggs is to ensure they are always busy by giving them plenty of space and enrichment: Let them out in the yard during the day, throw some cracked corn or other sorts of chicken scratch in the run that they can forage. You can also hang a cabbage which will keep both them and you entertained.

If you suspect one of your chickens is eating your eggs, you will have to react quickly. There are a few things you can do to stop this bad habit:

If nothing works, you will have to catch the culprit and possibly send her to freezer camp. If egg-eating is not stopped, it will get worse, and as the other chickens realize that eggs are eatable, they will start doing it, too.

Is an Egg with a Hole in the Shell Safe to Eat?

Eggs with broken or punctured shells should not be eaten unless the damage occurred recently in a clean environment. When an egg breaks, the protective coating on it is compromised, and bacteria can enter the egg.

Bacteria growth is accelerated in an environment with nutrients like protein and moisture such as what’s found inside raw eggs. Sometimes, it will take just a few minutes for a bacterial colony to double in population size. This level of bacterial proliferation can soon lead to food poisoning if consumed.

Not all bacteria can be killed by cooking, and even if you kill the bacteria, they may have produced toxins that are unsafe to consume.

You may think that you’ll be okay if the egg has a slight crack, and you may very well be right. But it’s best not to take the chance. Cracks are often an indication of bacteria, and what might happen can range from bad smell or taste to illness.

How to Prevent Holes in Eggs

Collect eggs regularity. That way, there will be more space in the nesting box, and the hen is less likely to damage it when moving about.

Eggs with thin shells are naturally more fragile and prone to cracks and holes. If your chickens lay thin-shelled eggs, they probably need more calcium in their diet. You can try switching your chickens to a feed with added calcium or supplementing the feed with crushed eggshells, oyster shell grit, or other sources of calcium-rich supplements.

Bonus Info: All Eggs Have Holes in Them

If you look through a microscope, you will notice that all chicken eggs have lots of tiny holes in their shells. This is because the eggshell is made up of tiny pores which allow air to get in and out without letting bacteria in or allowing moisture to escape.

Over time, some bacteria will get in and start to break down the egg. When this happens, a gas is released, and the holes prevent old eggs from exploding when gas buildup increases the pressure inside them – unless the gas accumulates too quickly.

Even more importantly, these pores in the eggshell provide oxygen to a growing baby bird. Without this, it would suffocate before it hatches.