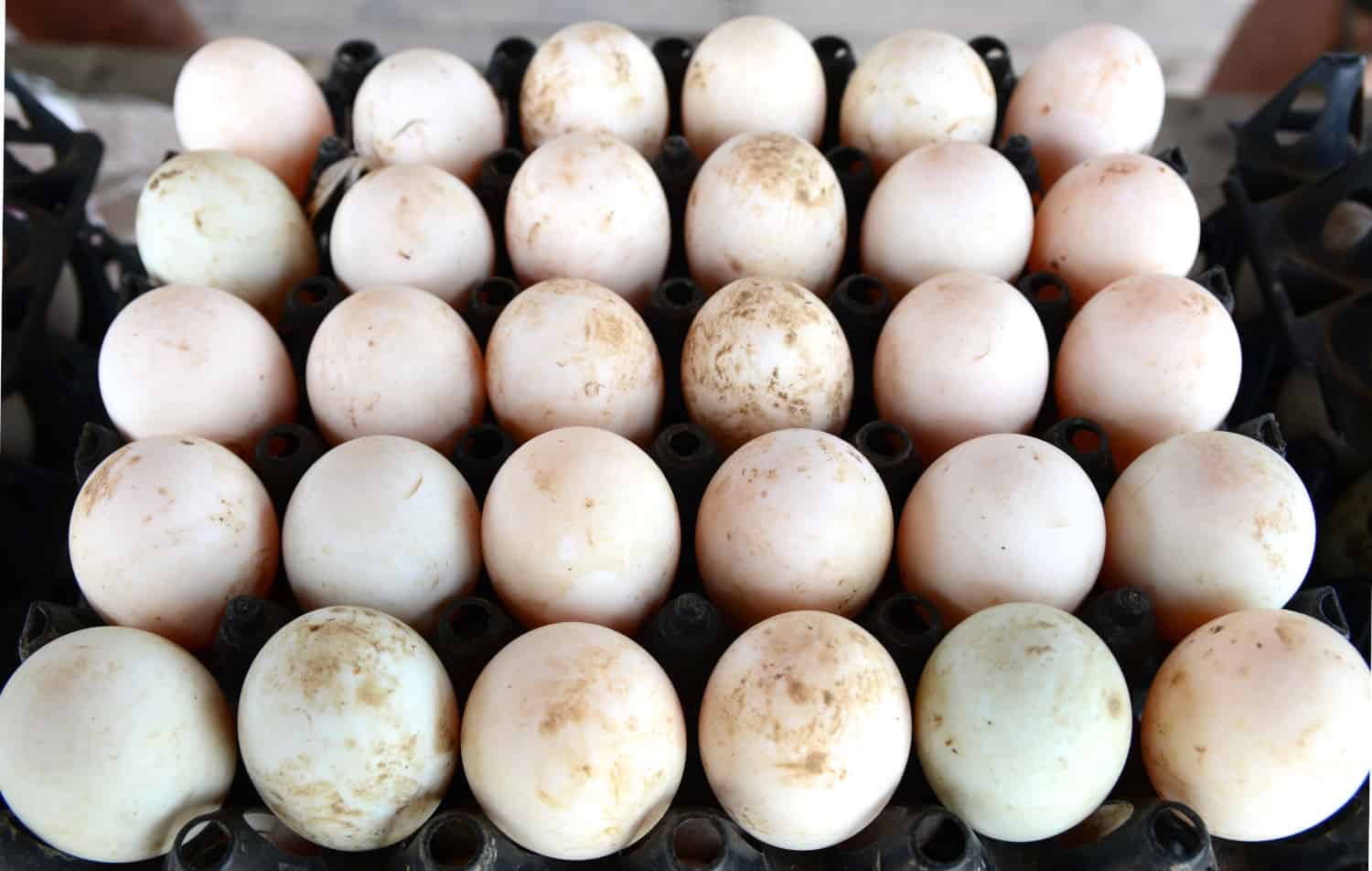 If you’re looking to get ducks for your backyard or homestead, you may be wondering what breeds are best for eggs. And if you want the best possible egg production, then you’ll need to choose the best breed for your needs.

When I decided to add a flock of ducks to our constantly growing poultry family, it was important to us that they were great egg producers. We wanted the meat, but we also wanted a steady supply of eggs. So I talked with several duck breeders and have since tried many different ducks, and I realized that many factors go into choosing the right breed.

Based on productivity, feed conversion, and related factors the best duck breeds for egg production are:

In this article, I’ll cover these top breeds and explain what makes them so good for this purpose. I’ll also provide information on what to look for when choosing your breed, and which ducks will lay the largest eggs.

Why Choose Ducks for Egg Production?

When people think about eggs, chickens often come to mind. However, ducks are also excellent egg layers. Ducks provide many of the same benefits as chickens do to your yard (fertilizing, pest control) while also producing delicious eggs with a higher nutritional value than chicken eggs. In fact, duck egg yolks are richer in folate, iron, and vitamin B12 micronutrients. Often, people with egg allergies can replace store-bought eggs with duck eggs.

Not only are duck eggs healthier they are also notably bigger. A large chicken egg weighs around 2 ounces whereas duck eggs typically weigh 0.8 to 1 ounce more.

Ducks eggs are also great for baking. Their egg white is more viscous, which means your baked goods will have a higher rise and be more fluffy. We once baked two cakes with the exact same recipe, except one with chicken eggs and the other with duck eggs. A blind taste test conducted by our family and a couple of friends reached a unanimous verdict that the cake made with duck eggs was better.

You may also have heard that ducks lay fewer eggs, and that is partly true. Most duck breeds do lay fewer eggs than your typical chicken, but this is purely a matter of choosing the right breed. The most prolific layers will produce as many eggs as the highly productive ISA Brown chickens. The reason why duck eggs are not nearly as common in supermarkets is that ducks are less suitable for large-scale farming: they require more space than chickens and are less adaptable to the conditions of confinement.

The best ducks for egg production will be prolific egg layers that give at least 200 eggs per year. Good layer ducks also produce large eggs that weigh between two and three ounces on average. The table below shows the most productive layer ducks sorted by how many eggs they lay annually based on my measurements and what other breeders have reported.

However, finding a good breed is not just about numbers. Good backyard layers should also be great foragers and good mothers. These types of ducks are cheap to feed and will ensure the continued production of future egg layers.

One other characteristic of great layers is that they are also good meat birds. While egg production is your primary objective, you may also want to be able to yield tasty and tender meat from young drakes and excess ducks in order to diversify their benefits and make good use of your incubation efforts. They don’t need to be dual-purpose birds, but they should also not be too skinny and tough to eat.

What Duck Breed Is Best for Eggs?

Considering those factors, here are the best duck breeds for egg-laying:

Meet the Welsh Harlequin Duck, possibly the best domestic egg-laying duck breed in the world. Though they lay slightly fewer and smaller eggs than the Khaki Campbell, they are still prolific egg-layers at roughly 53 pounds per year per bird.

These wonderful creatures will seem like nothing is too much trouble. Tough and great foragers, this duck happily hatches lots of ducklings and raises them to be healthy and hearty.

The Welsh Harlequin also provides good, lean meat with a low feed conversion rate and a mild flavor. At about 5 pounds, they are a bit light compared to real meat ducks but still a good size. If they were much bigger, they would use too many calories to grow and maintain their body weight instead of producing eggs.

The industrious Khaki Campbell Duck is a wonderful breeder and lays the most eggs measured in total annual weight (56 pounds per bird). This has earned them the second spot on the list.

They are good mothers who can take a while to become broody, but as soon as they do, they will protect their ducklings, even if it means laying their own lives down for one of theirs.

At about four pounds, they are slightly lighter than the Welsh Harlequin but still a good and tasty meal for a family. I particularly love these ducks because they don’t require much care – send them out foraging in the field or backyard, and your feed costs will be minimal.

Even though the Indian Runner Ducks are a bit nervous and can be a little harder to take care of than some other breeds, they make up for it with their enormous egg production. 340 eggs per year is nothing short of impressive-

They’re also pretty darn cute and have a ton of personality too. That being said, watch out if you want to breed ducklings – you’ll probably need a good incubator because Indian Runners don’t go broody very often at all.

But hey, it’s worth the effort when you get so many delicious eggs with very low feed costs. Indian Runners are amazing foragers and will find a big part of their food in your backyard. They don’t offer tons of meat, but what you get is tasteful and lean.

What Duck Lays the Biggest Eggs?

The buggest duck egg is a tie between American Pekin and Rouen. Their giant eggs will often reach a weight of 3.2 ounces which is the largest eggs of all domestic or wild duck breeds. However, at 200 eggs per year, the American Pekin is twice as fruitful as the Rouen.

How Often Do Ducks Lay Eggs?

Domestic ducks can lay eggs anywhere from one to over six times per week on average, depending on the breed. While most chickens slow down significantly or stop laying entirely during the darker months (unless you provide light in the coop), most ducks will lay throughout the winter months. However, there are exceptions, such as my Muscovys which will stop laying around late October.

Ducks usually lay their eggs in the early morning, just after sunrise, but this is not always the case. It seems new layers have a tendency to lay their eggs later in the day, and I have occasionally found an egg in their pen in the late afternoon when I am about to close down for the night.